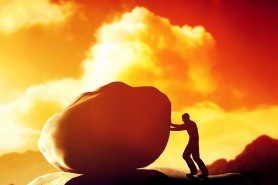 Here’s a sneak peek at the book I’m currently writing, Seven Days of Fearlessness. My goal is to finish it by the end of this month. My plate is less full than normal right now, and I’ve set aside a week to hide and write at a cabin in the woods owned by some friends of ours (thank you S and T, I love you), so finishing is actually feasible. However (if this isn’t the most ironic thing I’ve said all year, I don’t know what is), the whole idea of finishing this book about fearlessness is giving me anxiety: What if, when I’m finally done, I realize I’ve written nothing more than a 30,000-word collection of drivel and slop? Or what if I leave out something crucial, or—worst of all—say something that’s not doctrinally sound? What if I not only fail to find a publishing company who wants it, but they send me rejection emails full of LOL emoticons?

And that’s when I remember that I’m doing the very thing this book addresses: fretting. Spending my energy on worry. Wasting precious time on ridiculous, exhausting thought processes. In other words, the truth the Lord gave me, and which I’m attempting to put down on paper in this book, needs to be said. So let’s get on with it.

When Jesus called His disciples, He expected immediate obedience, and they gave Him just that. The moment He said, “Follow Me,” they dropped what they were doing and walked away from their old lives. There was no time to second-guess Jesus’ command, work out the details, overthink the situation, or even say goodbye to their friends and family. Imagine if Peter, Andrew, and the rest had said, “We want to follow You, Jesus, but it’s scary to abandon everything we’ve known to go who-knows-where and do who-knows-what as Your disciples. As soon as we muster up the courage and work out the details, we’ll give You a call.” No doubt Jesus would have moved on and found other disciples who were willing to obey before they possessed full understanding, unwavering faith, or unflappable courage.

Sometimes, faith and fortitude arise in our heart, followed by obedience. But more often, obedience must happen while faith, understanding, and courage are in short supply. Don’t wait for the courage to follow Jesus unreservedly, or one day you’ll be eighty years old and wondering why He never gave you the wherewithal to change your corner of the world. The original command—”Follow Me”—is all you need to obey. Courage and clarity will be released in the obeying.

From: Seven Days of Fearlessness